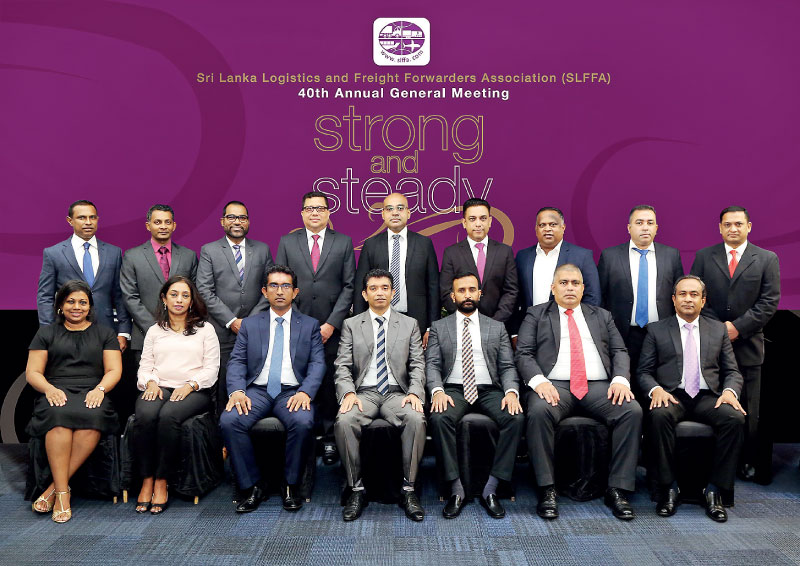 In addition to marking four decades of service in the logistics industry, the AGM will also go down in SLFFA history for being the first to be held on a virtual audio-visual platform with the participation of over 130 members and invitees.

The AGM also created a lot of buzz and excitement within the logistics fraternity as an election was held for a position in the Executive Committee using an electronic voting platform, again marking another significant milestone in SLFFA history and the logistics industry. Mr. Dinesh Sri Chandrasekara (Director, HTL Logistics) was appointed as the Chairman for 2021/2022 succeeding Roshan Silva. Channa Gunawardena and Andre Fernando were appointed as Vice Chairman and Treasurer respectively.

In his speech, as the 20th Chairman of SLFFA, Dinesh Sri Chandrasekara said the industry was at a critical juncture given the volatile times. “The first quarter of the last financial year was the worst-hit, with business at its lowest. Come second and third quarters, business volumes improved; yet, imbalances within the shipping industry continued, leading to significant mismatches in demand and supply of capacity, and record-high freight costs,” he said. “Working capital constraints are weighing down on our industry and the present foreign exchange crisis is further impeding business prospects,” he added. SLFFA new Chief said the liquidity crunches across all industries spill over to freight forwarders and though this problem has been in existence for a while, at present it looms darker than ever before. In order to mitigate the risks to which freight forwarders are exposed and to provide clear information on the creditworthiness of customers, SLFFA is currently working with a software developer to modernize the debtor database. Once completed and launched, which would hopefully take place within the next two to three months. The urgency is very real, given the upcoming South Indian ports. It is actually now or never,” the SLFFA Chairman warned. It was pointed out that as per the World Bank Logistics Performance Index, Sri Lanka is ranked 94th out of 160 countries. This is despite the Port of Colombo ranking 23rd amongst the busiest ports and 15th amongst the best-connected ports in the World. Countries which are poorly connected and even landlocked have better rankings. “Our logistics industry is well-ahead of our regional competitors, with many of our companies doing exceptionally well.

How technology in the freight forwarding industry can benefit your business?

How technology in the freight forwarding industry can benefit your business?

The prestige and exclusivity of a professionally-planned friendly golf tournament by HTL Logistics at the beautiful Prestige Golfshire Club in Bangalore had an impressive turn-out.